Bit Rot is three things: An internationally traveling art exhibition, a catalogue accompanying that exhibition and a very large compendium of essays and fiction to be published in October 2016. Bit Rot combines new and existing fictional short stories and essays written and compiled by the artist, and creates a parallel narrative to the exhibition itself: pieces in the exhibition become materializations of words, and some of the words in this book are a dematerialization of objects in the show. Bit Rot addresses subjects such as the death of the middle class, the rise of the Internet and its impact on our lives, and in short, evinces a shedding of twentieth-century notions of what the future is and could be. “When the pioneers crossed North America from east to west, the first thing to be thrown off the family Conestoga wagon was the piano, somewhere around Ohio. Then, somewhere near the Mississippi River, went the bookcase, and by Nebraska off went the books … and by Wyoming went everything else. The pioneers arrived in the Promised Land owning only the clothing on their backs. They may have missed their pianos, but the joy of being in the New World far outweighed the sense of loss. There are different modes of short works in this book, all written since 2005. Each came about in a way that, at the time, felt random and one-off-ish — but now I look at them together and see they essentially represent all the furniture I’ve tossed from the back of my wagon, year by year, over the past decade. I miss some of those pianos I threw off my wagon, but if I hadn’t, then I’d be stranded somewhere back there, and that would have been intolerable. I’ve titled the collection Bit Rot — a term used in digital archiving that describes the way digital files of any sort spontaneously (and quickly) decompose. It also describes the way my brain has been feeling since 2000, as I shed older and weaker neurons and connections and create and enhance new and unexpected ones.” Excerpt from the introduction to Bit Rot by Douglas Coupland 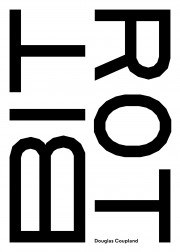